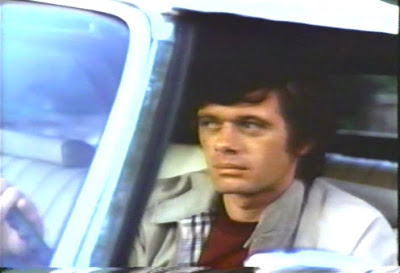 Michael Sarrazin, the star of such genre flicks as "Frankenstein: The True Story" and "The Reincarnation Of Peter Proud," has passed away in Montreal. The 70-year-old actor had cancer.

Sarrazin was best known for playing opposite Jane Fonda in the classic film "They Shoot Horses, Don't They?"

I met Michael Sarrazin once, albeit very briefly. He was staying in a center city hotel in Philadelphia in the early 80s. A concert producer who I was dealing with as a journalist dragged me to the hotel restaurant because he'd heard Sarrazin was staying there. Sure enough, Sarrazin was trying to have a peaceful drink at the bar, and my acquaintance (male -- and just a tad flamboyant) made a rather obvious attempt at picking him up, leaving him with a card he clearly had no interest in using. I managed to hustle the producer out of there before things got too embarrassing, then sneaked back in and apologized to Mr. Sarrazin. He was gracious about it, poor guy. By the way, his doe eyes were every bit as beautiful in person.

I must admit my own young gay heart did skip a beat at the striking image of him shirtless on the "Peter Proud" poster.

Who could forget this image?

Though a lot of us would have been delighted to hear gay rumors about him, I don't think there ever were any. I do remember him being romantically linked with Jacqueline Bissett, but that's the only personal dish on him that I recall. I think the gayest thing he ever did was to costar with Streisand in "For Pete's Sake."

But seriously, folks -- Michael Sarrazin was a fine actor who didn't get as much recognition as some of his Oscar-nominated co-stars, and he should have. I was a fan, and I'll miss him.
Posted by Jack Veasey at 9:42 PM