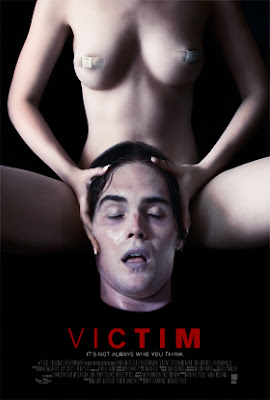 Unfortunately, there’s no way of saying much of anything about IFC film’s Victim (2010) without betraying the film’s premise, so – SPOLIER DIRECTLY AHEAD! – I’ll start off by doing so: the film depicts an anonymous young man being held prisoner and subjected to involuntary sexual reassignment surgery.

Shortly after the credits, our young protagonist (Stephen Weigand) gets conked over the head and kidnapped in the parking lot of a bar where he’s just failed to pick up an attractive young woman. He wakes up in the basement of a mansion, where a mad doctor and his man-mountain assistant torture him with brutal beatings, starvation, injections, and eventually surgery. We never learn his name (the final credits call him only “Young Man”), and we learn nothing about him until nearly the end of the film (THAT plot twist I’ll keep secret). His “treatment” apparently erases his memory early on, so even he doesn’t know who he is for most of the plot.

His captor Dr. Volk (Bob Bancroft) seems somewhat feminine, and, while being generally cruel, seems to warm to our “Young Man” as his transformation progresses, even kissing him on the cheek occasionally. Volt’s assistant (Brendan Kelly) is referred to only as “Mr. George,” a more likely nickname for a hairdresser than an Igor-like henchman, but other than that he’s all about keeping the prisoner in line – he’s bald, bearded, built, big, armed with a metal club, and never speaks. He seems very eager to do his job, perhaps because of a mysterious reward Volk has promised him “when your time comes,” but we never learn ANYTHING about the exact nature of his involvement with this creepy situation. He does give a surprisingly nuanced performance despite his silence, seeming utterly committed to his mission, but occasionally showing a twinge of regret. He becomes more human when a female detective shows up asking inconvenient questions, a distracting subplot that otherwise really doesn’t advance the story.

The “young man” regularly reads from the only object in his cell, the diary of a young girl. Sometimes he hears tape recordings of patronizing advice on how to be feminine. We can’t help but sympathize with him, although one piece of the puzzle -– the shaky-cam murder of a woman seen before the opening credits -– remains unclarified through most of the film.

The story is engrossing, and the cast does a good job of making you wonder exactly what the hell is really going on here, and why. The apparent sexual tensions between the few characters in this claustrophobic setting add to the mystery. Of course, the involuntary sex change really isn’t the main (nor even the weirdest) plot twist.

Directors Matt Eskandari and Michael Hultquist have made an absorbing film that’s probably wise in its decision to stay on the short side (it’s only 74 minutes long, and while not everything in it works, it never loses our interest). It could easily have been just another torture-and-captivity flick in the vein of “Saw,” but it’s not.
Posted by Jack Veasey at 1:49 PM