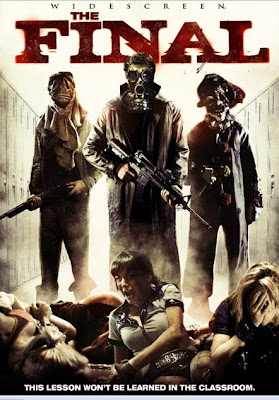 Yes, this is my first review in quite awhile. I'm not going to get in the habit of doing lots of reviews -- just don't have time -- but the way this film grabbed me was really exceptional.

I saw this brand new movie on SyFy last night. I wasn't expecting much, but I was riveted. Brilliantly written and acted, this was the most intense horror film I've seen in ages.

Directed by Joey Stewart and written by Jason Kabolati, tt's about a group of high school kids tormented by bullies who finally have enough and plan to avenge themselves on their tormentors. After we watch the insufferable popular kids wreak merciless havoc on our heroes for about the first half of the film, the "misfits" invite the bullies to a party, drug them, and get medieval on their asses. With the recent suicides of bullycide victims in the news, the subject couldn't be more timely.

A familiar horror film theme, I grant you, but no one's ever done it as eloquently as these kids. During the long and harrowing "torture party" that makes up the second half of the film, most of the horror comes from the dialogue -- as Dane, the ringleader, and his cohorts make these very articulate speeches to their captives explaining WHY they're doing what they're doing, and scathingly dismissing all attempts to talk them out of it. He begins with a "good news/bad news" announcement: "the good news is that we're not going to kill you. The bad news is, you'll wish we had." Marc Donato's very chilling understated performance as Dane provides the film with a lot of its juice.

Not that the violence isn't awful (and very personal to each victim), or that the film doesn't have its share of unusually upsetting gore. The movie just understands that no matter how bad physical realities are, the worst part of horror happens in the mind. As Dane tells hs victims at one point: "Think of this as the Final, and there's only one question -- what did I do to deserve this?" They all know they did plenty, and it's way too late for "I'm sorry."

By the way, the other stand-out performance in the film is that of Dane's female co-conspirator Emily, played with unnervingly calm menace by Lindsay Seidell. Even when she's masked and silent, she's quite a disarming, electric presence.

This movie is definitely not for the squeamish, but is fascinating and powerful, and really has something to say. And it scared the hell out of me even though I, of course, identified with the misfits.

Oddly, there are a lot of internet reviews angrily bashing this film, dismissing the writing and acting particularly, though I found the film exclelled remarkably in these areas. I guess it's not all that surprising. We all know how many bullies are on the internet. I bet this flick strikes a nerve with them in a big way.
Posted by Jack Veasey at 2:37 PM