A GIRL IN WOLF'S CLOTHING 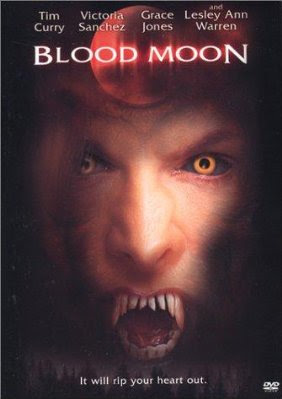 It stars Tim Curry as impresario Harley Dune (love the name), who runs a traveling carnival that specializes in freaks. One of them is the seductive and darkly philosophical half-man-half-woman Christine/Christoph, played to the hilt by Grace Jones. The star attraction, though, is Tara the Wolf Girl (Victoria Sanchez), covered in shaggy hair since infancy due to a condition called Hypertrichosis. Otherwise Tara is a normal teenage girl, but the show plays her as a vicious, snarling creature that frightens the audience.

The real surprise in the show is the prominence of musical numbers in a style similar to the decadent jazzy show-tunes of the film "Cabaret." Curry and Jones both perform musical numbers, and there is even a hilarious bawdy song from a dwarf backed by an all-girl chorus line, "Just The Right Height For Delight."

All goes smoothly till a group of teenage bullies cruises into the audience and starts harassing Tara during her act. However, this causes her to bond with a nerdy local boy Ryan (Dov Tiefenbach) who is a favorite victim of her tormentors. Ryan's mom is a cosmetics researcher (Lesley Anne Warren) who is testing a hair removal drug on mice. He tries to use the drug to cure Tara, and, though she starts shedding hair, it has an ironic side effect -- the more normal she appears, the more she becomes like a wild animal inwardly. You can imagine what's in store for the bullies, who just don't know when to quit.

Though it has some horror movie tropes and violence, the film is really more of a cross between a drama and a musical, driven by the complex relationships between the characters. Sometimes it's darkly funny, sometimes it's quite touching -- as in scenes showing Tara's affectionate friendship with the show's gigantic fat lady -- and sometimes it's quite disturbing.

"Blood Moon" certainly addresses themes relevant to gay and transgender people -- being different, being bullied, etc. -- and it prominently features two gay icons, Curry and Jones, who may not be on screen a LOT, but make quite an impact when they do appear. One of Jones's songs ambitiously turns the whole idea of gender identity on its ear. The only female in the bully clique secretly comes on to Tara, and for the guys there's even a scene with full frontal male nudity (though the point of it is to humiliate the character because he has such a teeny willy, so don't get too excited!)

This movie won't make you jump, but it will make you think and feel (and sometimes laugh). It's not all that scary, but it is fascinating -- a very unusual film if you're up for something truly different. The whole cast is superb. The film is directed by Thom Fitzgerald and written by Lori Lansen, and they've really crafted something special.
Posted by Jack Veasey at 11:19 AM