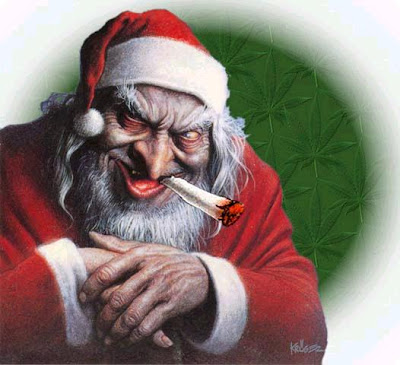 Last night I watched something I always try to see around Christmas -- the Tales From The Crypt episode "All Through The House." It's set on Christmas eve, and features a killer Santa -- this time played by Larry Drake, later to evoke both laughs and screams as "Dr. Giggles."

There's a twist, though -- Santa, an escaped lunatic, wants to invade the home of a scheming woman (Mary Ellen Trainor) who's literally just killed her second husband for insurance money. The wife sees this as an opportunity to frame crazy Santa for her husband's murder, but forgets one thing: her small daughter's unquestioning love for Santa Claus.

Originally a comic book story in EC's "The Vault Of Horror," "All Through The House" was previously dramatized in the 1972 Amicus theatrical film "Tales From the Crypt," directed by the legendary Freddie Francis. For a change, the Americans did as well as the Brits with the material, though -- this HBO "Crypt" episode, only the second in the series, was directed by the great Robert Zemeckis. I found it on DVD as part of "Tales From The Crypt: The Robert Zemeckis Collection."

Actually, I enjoy Christmas horror films partly because I'm not big on Christmas -- being bombarded with all the Norman Rockwell family propaganda gets old fast if your own history was not so cheery. I'm also one of those folks who fights with Christmas depression every year. But my partner and my pets are a fine family now, and I am particularly grateful for them at this time of year.

Whether your favorite seasonal film is "Gremlins," "Silent Night, Deadly Night" or something more traditional like "White Christmas," I hope you can find time to enjoy it -- and that you and your loved ones have a joyous, safe, peaceful and prosperous holiday.
Posted by Jack Veasey at 10:14 AM