MANY STARS AND SOME TASTY JERKY 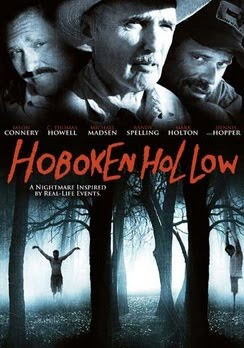 No, this movie has absolutely nothing to do with Frank Sinatra's New Jersey home town.

It lives up to the "bloody" in the collection subtitle, that's for sure, though I wouldn't call it a "slasher" movie. It vacillates between being a graphic torture porn flick and a serious docudrama sort of thing. It’s based on a real-life mid-1980s case that the media called the "Texas Slave Ranch." Three men who'd run a ranch where workers were held against their will were convicted of "conspiracy to commit aggravated kidnapping" but received inconsequential sentences, even though at least one of their victims died (there was no body as proof, because they'd burned it). Evidence against them included an audio tape of a worker being tortured with a cattle prod.

The cattle prod, of course, gets quite a workout in this film. The gross-out meter is set high early on, when a speeding truck splatters a guy all over the screen, catching an eyeball in the windshield wipers and leaving a torn-off foot to be thrown to the hogs. We also learn that workers who die are made into "beef jerky", on which their captors lustily gnosh.

The bad guys relish punishing workers with torture, particularly in one lengthy scene late in the film. Mark Holton and Lin Shave – the latter in effectively creepy wart-faced hag make-up – give two of the film’s best performances as the enthusiastic Brodericks, the psycho couple who own the ranch. Holton’s “mentally challenged” character Junior, in fact, provides the film’s only surprise.

All of the cast does a good job, especially Howell as the sleazy ranch foreman, though his character's actions are ultimately puzzling (that such a perversely gleeful torturer should be the one character to act on a pang of conscience seems pretty implausible). Howell even looks scruffily sexy with a black beard that has a splash of white in it, until he opens his mouth to reveal a hideous appliance simulating awful redneck teeth.

Victim-hero Jason Connery (yes, Sean’s son) is handsome too, under all the grime, but his role doesn’t allow him to do much. Annoyingly, almost everything about his down-and-out Iraq War veteran character is immediately explained in a voice-over, leaving him with little to convey. Unfortunately, much information that should come out through action or dialogue is supplied in this solemn narration at the beginning and end of the film.

Madsden and Hopper are completely wasted. Hopper plays a complicit or oblivious sheriff who we see only briefly a couple of times. Madsden is part of a pointless minor subplot about real estate that ultimately has no impact on the story.

In spite of all this, the film did hold my interest, maybe only because the story behind it is compelling enough that I wanted to see it resolved. But I don't recommend it if you're squeamish.
Posted by Jack Veasey at 11:29 AM