I'm delighted that February is Women In Horror Month, because my own late mother's birthday is in February, so it has a certain poetic justice for me (don't think about that too much). I swore I'd celebrate the month in grand style, or my name isn't Norman B...er, Jack Veasey.

No, my first tribute won't be Psycho, since the villainess in that classic isn't really a woman. My nominee for the scariest onscreen mom of all time is MARGARET WHITE, whose Bible-thumping brutality made her daughter Carrie into a prom-incinerating one-woman terror squad. Margaret was played to the hilt of the big knife by Piper Laurie, who got one of the few Oscar nominations ever bestowed on a scream queen (as did Sissy Spacek for playing her daughter). She didn't win (neither did Sissy) -- but horror fans everywhere will always cherish her lurid, over-the-top performance. Her chant "they're all gonna laugh at you" will ring in our ears forever as we deliriously hallucinate this: 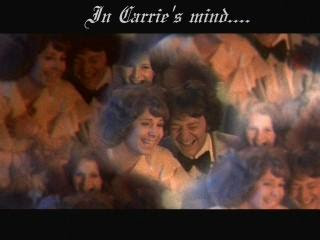 Here she is taking a final stab at "righteous" parenting: 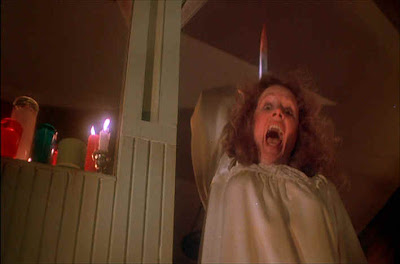 and here she is again, receiving the most appropriate comeuppance ever depicted on film: 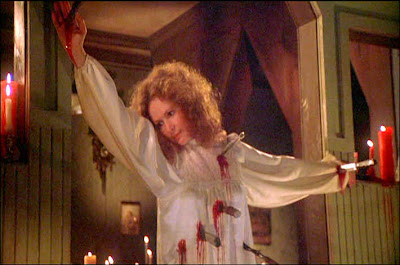 See, Norman, you didn't know how good you had it. If you'd been Margaret's boy, you wouldn't even have made it to adulthood.
Posted by Jack Veasey at 8:43 AM