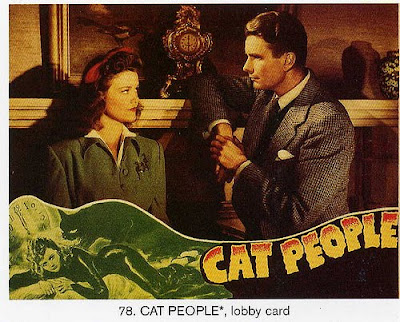 I'm grateful that "Women In Horror Month" gives me the occasion to review one of my all-time favorite films, which also happens to be the ultimate female horror film: the original 1942 Cat People, which taps into the great Freudian fear that if a woman unbridles her sexuality, she'll unleash a devouring beast.

The woman in question is Irena Dubrovna (Simone Simon), a Serbian fashion sketch artist who is small, delicate, exotic, and exquisitely beautiful. She is sketching at the zoo one day -- surrounded by the caged wildness that perfectly symbolizes the film's main theme -- when a handsome maritime engineer, Oliver Reed (Kent Smith), teases her about littering after she throws a crumpled sketch at a trash bin and misses. Reed flirts with her, and she invites him to her apartment for tea. He doesn't notice that her discarded sketch is of a panther impaled by a sword. 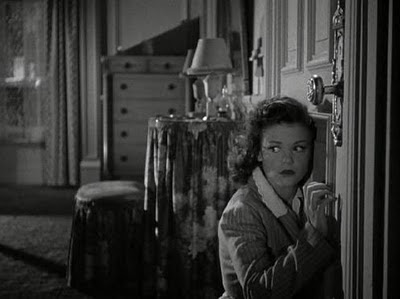 Oliver seems to be in the habit of not noticing things, or of ignoring anything inconvenient to his desires. As he and Irena quickly fall in love, he dismisses her stories of dark legends from her native village as fairy tales. not seeing that her childhood was traumatic and that these "superstitions" made a deep impression on her. He also doesn't notice that his spunky co-worker Alice (Jane Randolph) is in love with him -- until she tearfully confesses it to him at the water cooler after he and Irena are unhappily married.

Irena is afraid that if she and Oliver consummate their marriage, she -- like the "cat woman" her mother was believed to be, according to childhood taunts -- will turn into a panther while aroused, and kill him. As time drags on and Irena remains paralyzed by this fear, a frustrated Oliver confides in Alice about the situation. Alice suggests he should send Irena to see her friend, psychiatrist Dr. Judd (Tom Conway, also the star of producer Val Lewton's classic "I Walked With A Zombie.") When Irena realizes that Oliver told Alice about their marital problems -- and that Alice's interest in Oliver extends beyond casual friendship -- Alice learns that Irena's jealousy is as much to be feared as her passion.

Alice is followed twice at night by a slinking, growling form that we only partially glimpse in the shadows. The scene where it menaces her at her apartment building's basement pool is justifiably famous as a masterpiece of subtle horror cinema (and an attempt to duplicate it in the 1982 remake failed miserably).

Because of these incidents, the supercilious Dr. Judd begins to take Irena's delusions more seriously, but he still believes them to be delusions. This belief will turn out to be more dangerous than he realizes -- as will his unprofessional attraction to Irena.

"Subtle" is an important word here. Director Jacques Tourneur, cinematographer Nicholas Musuraca and scriptwriter DeWitt Bodeen all take a very restrained approach for as long as possible, never giving us enough information or explicit imagery to clarify whether Irena's fears are delusional or well-founded until we're deep into the story. Even after the big reveal, we're left to fill in a lot of details with our imaginations. Unlike Paul Schrader's remake, the film contains absolutely no gore, no sex, and we never see "the monster" except in shadow. The result is a suspenseful and eerie gem of a film, a sort of dark fairytale for adults.

I don't really mean to bash Schrader's remake -- it's an update, and its conventions suit the time when it was made. Simple lovemaking was no longer considered daring in 1982, so Schrader and company had to allude to incest to give the film a needed jolt of the lurid. It worked -- but it doesn't match the charm, atmosphere, or beauty of the original.

By the way, though "Cat People" shows its two main female characters in a rivalry over a man, it does depict Irena and Alice as career women in an unprecedently casual manner. Their careers are a fact, not an issue. Alice, in particular, is accepted as "one of the boys" at her job -- so much so that the possibility of romance with her never occurs to Oliver until it's staring him right in the face. And Alice is the one who brings it up.
Posted by Jack Veasey at 10:30 AM