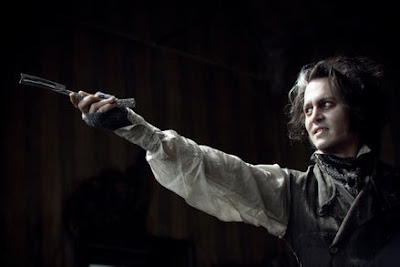 (Johnny Depp sings to his razor.)

Awhile ago. my loving partner gave me the Johnny Depp DVD version of "Sweeney Todd: The Demon Barber Of Fleet Street," and I'm still pretty sure it wasn't a veiled message meaning "God, get a haircut already or I'll cut your throat." I'm kidding, of course -- we both love the show.

For those who don’t know, “Sweeney Todd” began life as a “penny dreadful” serial in 1846. The title character is a barber who robs selected customers. and cuts their throats. Their flesh is then baked into meat pies by his partner in crime, Mrs. Lovett; her pies become wildly popular because they taste so good. The story was first brought to the stage as a Victorian melodrama, but the most famous version is a Tony Award-winning Broadway musical with songs by the brilliantly caustic Stephen Sondheim. In the musical version, Todd has a humanizing back story; he was framed for murder by a corrupt judge who stole his wife and daughter. Todd’s daughter Joanna is now the judge’s ward, held as a virtual prisoner. His crimes are driven by his obsessed desire to avenge himself, and to reunite with her. The story is complicated by the unwitting interference of two young people – a sailor who loves Joanna from afar, and Todd’s errand boy Toby, who is more devoted to Todd’s associate Mrs. Lovett than anyone realizes. To make matters worse, Mrs. Lovett herself is in love with Todd.

"Sweeney" is a story meant for the screen, where it’s able to use the more in-your-face, detailed gore typical of a horror film to toss in a shock or even a gross laugh. In some ways it can treat its slasher aspects more casually than stage versions did, which adds to its dark humor. Depp himself is PLENTY scary here, though he has to be likeable and funny too. Tim Burton directs him so that he always manages to have intimately sidled right up to you when he suddenly ratchets up the menace.

Scare meter aside, the move had to sink or swim as a musical first, and it does that well. I don't buy the complaints that '"Sweeney" suffers from Depp not being a belter like Len Carou or George Hearn in the stage versions. Depp doesn't need to belt anyway -- his intimate talking-on-pitch singing is spot on, and emphasizes Stephen Sondheim's lyrics, which cut as sharply as Todd's lethal razors -- only here they start slicing from someplace unnervingly close to your own ear.

The other singers all fare extremely well. Helena Bonham Carter has a more conventionally beautiful voice than you’d expect to come lilting out of her Goth pasty face, and is free to clown with a lighter touch than her impeccable predecessor Angela Lansbury could; she and Depp have perfect chemistry together. It’s worth the price of admission just to see their performance of Sondheim’s ironic “By The Sea,” set amid a clever montage that follows them through little skits showing their relationship turn dismally dull as Carter’s lead vocal lists her ever-brighter expectations for their future together. Depp’s increasingly bored reaction shots are priceless.

The juveniles, errand boy Toby (Ed Sanders) and the cloistered Joanna (Jayne Wisener), actually sing better than the actors who had the roles in the various stage productions – especially Wisener, whose full-bodied, bell-clear soprano solo “Green Finch And Linnett Bird” would spread its wings lot more convincingly than it ever got to onstage if more than a shred of the song remained in the movie. That’s one bit of slicing I could have done without – editing of songs to suit a more typical movie length.

One thing director Burton does flawlessly is to imbue the film with the atmosphere of old London, tawdry and brutal, in a more pervasive way than any stage set could – the film drenches you with it (not to mention with gallons of blood).

This is probably the best movie version of the musical “Sweeney Todd” that fans could hope to expect. For those who insist on the whole score being included, there’s the Great Performances TV version with Angela Lansbury and George Hearn, which is still available as a DVD.
Posted by Jack Veasey at 11:44 AM