STANLEY: There's nothing like a guy with a nice snake 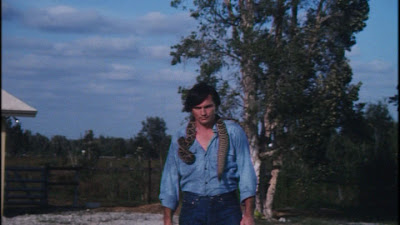 Stanley tries to do for snakes what Willard did for rats. It fails, but manages to do so entertainingly.

Released in 1972, Stanley is a low-budget morality tale about a Native American Vietnam vet, Tim (played by the gorgeous Chris Robinson) who lives in a swamp shack in the Everglades, barely subsisting by selling snake venom to a medical lab. Tim has issues, you see, and prefers the company of snakes to people -- particularly that of Stanley, a rattlesnake he carries with him everywhere. Tim comes up against the local gangster factory owner (Alex Rocco) who wants to turn every snake in the swamp into a cheesy belt. Tim, not playing with a full deck to begin with, wigs out when Rocco's thugs kill his brood of baby snakes, and an over-the-hill local stripper bites the heads off of some of his adult snakes onstage. The rest of the film is a bloody revenge festival.

The film is very preachy about animal rights, which is pretty hypocritical considering how many snakes are actually killed on camera during it -- crushed under rifle butts, shot, cut in half, swung by the tail till their heads smash against walls, etc.

To be fair, Robinson's affectionate snake handling is amazing, and the movie does live up to the poster's claim that it “will make your skin crawl" in many scenes, such as those where there are snakes crawling free all over his cabin (where he's holding a kidnapped girl).

The movie's main entertainment value comes from its many unintentional laughs, though -- from the hokey folkie protest songs on the soundtrack to ludicrous scenes where Robinson prays reverently among tombstones for his dead snakes or solemnly performs a snake wedding. The funniest thing is the way villain Alex Rocco repeatedly embarrasses himself on camera -- working out with absurdly tiny white dumbbells, or being caught freeze frame, grimacing, as he realizes he's jumping into a pool full of snakes. (Rocco’s scenes, for me at least, gain added laugh impact because I remember him playing Jo’s dad on The Facts Of Life.) 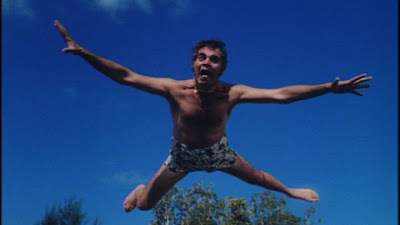 Then, of course, there’s the added attraction of seeing Robinson shirtless a number of times. He’s drop-dead ruggedly handsome and just barely on the cusp of becoming paunchy – which to me actually makes him sexier. His acting may be wooden, but the thought of him getting wood is downright drool-worthy.

At 109 minutes “Stanley” drags a bit here and there, but it's worth seeing. It's very funny, though it's not supposed to be, and if you're scared sh*tless of snakes (like I am), it will make you jump (and even squirm) now and then.
Posted by Jack Veasey at 10:33 AM