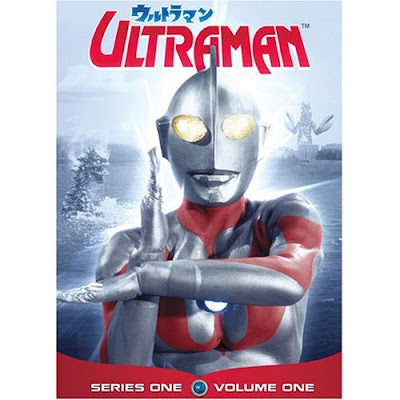 At last, those of us who’ve waited decades to see Ultraman again can see 20 episodes – with a good picture and pretty good, if not absolutely perfect, sound – on an inexpensive 2-disc DVD set. The set includes the entire first season of the show.

For those who don’t remember, Ultraman was a half-hour 1960s live action TV series about a gigantic flying superhero from outer space who merges with Hiyata, a young pilot from Japan’s Science Patrol (a sort of space-age police force that deals with extraterrestrial invaders, giant monsters and such). Because of this merging, Hiyata can walk away from what should have been a fatal crash with the space hero’s ship – but in a crisis he can turn into Ultraman. He holds up a flashlight-like device called a “Beta Capsule” and a voice on the soundtrack tells us, “Using the Beta Capsule, Hiyata becomes Ultraman!” We then see a flash of light and the hero’s towering figure rising up out of it. (Though I was very young, the idea that one could hold up a cylindrical object and suddenly become much bigger somehow resonated with me).

Usually Ultraman appears to fight a Godzilla-like rubber-suit monster (the effects director, in fact, is Godzilla’s creator, Eji Tsuburaya.). After a few minutes of fighting, a bulb on UM’s chest begins to flash on and off, and to beep. The soundtrack voice tells us that his energy is depleting in Earth’s atmosphere, which builds suspense -- if he can’t defeat the monster in time, the voice-over warns, “Ultraman will never rise again.”

Hiyata’s Science Patrol co-workers – a cute young woman with an annoying little brother; the serious Captain; a buffoonish fellow pilot who often does pratfalls and such, etc. – have no clue that he is also Ultraman. To be fair, there’s no resemblance for them to spot, as there was with Clark Kent and Superman – Ultraman is taller than a skyscraper and has silver skin and a pointy head. (He also has opaque egg-shaped eyes that look, as a friend so aptly put it, "like an insect's." Now and then you may notice that they have little holes poked in the bottom so that the actor can see!) Ultraman’s powers include great strength, martial arts skills, flying, and the ability to cross his arms and shoot cosmic rays from the heel of one hand. 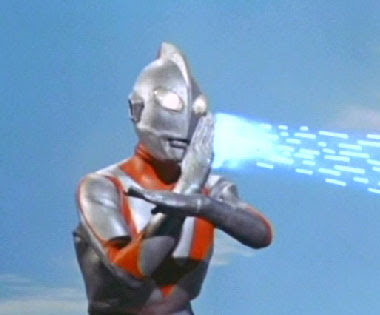 The dubbing is dreadful and the effects laughable, but that remains part of the series’ charm. One funny aspect is that the monsters continually get more and more outrageous looking and colorful (and sillier) because they had to come up with so many of them. Godzilla himself even shows up at one point, disguised, but not very effectively. 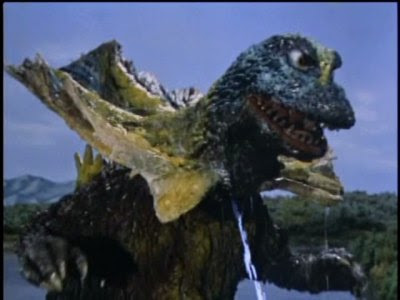 You can watch the DVD in Japanese if you want, and can leave the subtitles on even if you’re watching it in English – this is interesting, because the characters are often saying very different things than what was dubbed in. (For instance, the female character -- in an episode about a monster that eats pearls -- makes a rather surprising and solemn speech at one point about how her male co-worker does not "recognize a woman's wrath.")

These episodes are also complete, though when they first showed on American TV, they were edited for time – so some scenes appear in Japanese, with (and sometimes without) subtitles even if you’re watching it in English. This makes for a somewhat unpredictable viewing experience, but it never goes on for longer than a few minutes, so you don’t lose track of the story.

I found this set for five bucks at Kmart. On Amazon it’s around ten bucks. Trust me, it’s the deal of the century so far.
Posted by Jack Veasey at 9:35 AM