DON'T DEBUNK MY DIBBUK, THANK YOU VERY MUCH! 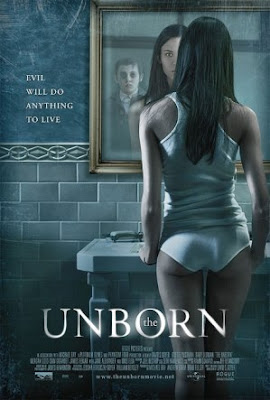 When I see a horror film, the primary thing I’m hoping for is that I’ll be scared. I find being scared by movies therapeutic – it’s good for my soul. And, truth be told, it seldom happens anymore. I’m usually mildly amused, but I don’t often find myself getting lost in the action, jumping at surprise movements onscreen, etc. When I do, I’m so delighted that I can easily forgive a film for failing in lot of other ways. Whether it satisfied the demands of my intellect is way down on my list of priorities – when I want that, I read philosophers.

I also particularly enjoy horror films that have some sort of spiritual content. I’m a recovering Roman Catholic, so I’m especially susceptible if – as in “The Omen” or “The Exorcist” – the imagery and atmosphere are Catholic. But I find most religions equally scary (don’t think about that statement too much). Any faith will do.

This week I watched "The Unborn" (2009), an American horror film about a young woman named Casey (Odette Yustman) whose unborn twin brother was possessed by an evil spirit called a Dibbuk -- which is gradually forcing its way into the world of the living so it can come after her. The story is tinged with Jewish mysticism from the Kabbalah; the biggest name in it was Gary Oldman, who did a plausible turn as a rabbi exorcist.

It was fairly eerie, and it took awhile before what was going on became clear; the girl is menaced by apparitions in mirrors, receives ominous warnings from her long-lost grandmother, and is stalked by a creepy little boy (unnervingly played by the remarkable Atticus Shaffer).

The flick got very bad reviews, mostly for things that are readily accepted in a movie that's say, Italian; the biggest criticism was that it didn't make really narrative sense (you could say that about practically any Dario Argento film, but critics love those). Yes, the plot made a point of telling us that twins are particularly vulnerable to possession by a Dibbuk because twins are like living mirrors, through which Dibbuks enter this world -- and yet the spirit possesses almost every non-twin character in the movie while trying to get to heroine Casey. Point taken, but -- who cares?

The movie is a roller coaster ride of scares. The demon in its non-human form is a repulsive vision that varies a bit each time we see it -- as did the monsters in "Alien" and John Carpenter's "The Thing." The cast does an excellent job, the cinematography is wonderfully stylish and spooky, director David S. Goyer times every shock perfectly. It kept me on the edge of my seat and made me jump several times. I enjoyed it, and I'd recommend it. You'll have a great time if you suspend disbelief and allow yourself to get into it.
Posted by Jack Veasey at 9:55 AM