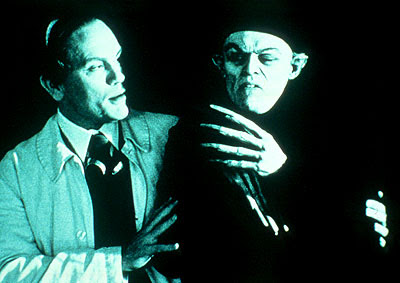 (John Malkovich and Willem Dafoe in Shadow Of The Vampire)


This week I revisited Shadow Of The Vampire (2,000) director Elias Merhige's fictionalized account of the making of the classic silent film Nosferatu. The film's central conceit is that star Max Schreck (brilliantly played with twitchy, barely-restrained menace by Willem Dafoe) actually is, unbeknownst to the cast and crew, a real vampire. Director F.W. Murnau (John Malkovich) has convinced him to play the role in exchange for the blood of his spoiled leading lady (Catherine McCormack) -- and on condition that he wait till the filming of the final scene to actually drain her on camera.

The company finds it odd that Schreck is shot only at night, and that they only see him in character and in full makeup (and the makeup job, I might add, is an unnervingly effective homage to Schreck's original). The catch is that, as they say, "you can't eat just one" -- cameraman Wolfe (Ronan Vibert) ends up a snack for Schreck, and producer Albin (a perfectly cast Udo Kier) starts to suspect what's really going on.

Everyone plays their role flawlessly, The film is darkly funny at times, but also really spooky and suspenseful. It lives up to the ingeniousness of the idea and makes it plausible. It also makes a very respectable tribute to the original film, especially in the recreation of "Nosferatu" scenes where it moves seamlessly in and out of the camera's POV, adding peeks at events occurring out of camera range.

The film's gay connection? For one thing, the title character in the novel Dracula is rumored to be inspired by author Bram Stoker's repressed love for his employer, stage actor Sir Henry Irving, on whom the vampire is allegedly modeled. 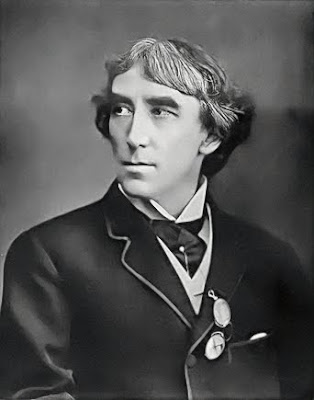 (Sir Henry Irving -- looks a bit like Gregory Peck, doesn't he? But perhaps what turned Bram on was having to call him "Sir.")

More to the point, Nosferatu director F.W. Murnau, a major character in Shadow Of The Vampire, was gay -- a fact the film doesn't ignore but doesn't really dwell on, either. 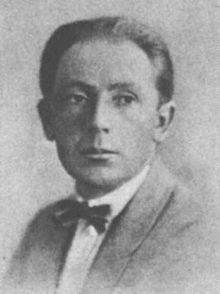 Ironically, Bram Stoker's widow successfully sued Murnau because he filmed her husband's novel without her permission, and ordered all prints of Nosferatu destroyed. Luckily for us, a few bootleg copies survived.
Posted by Jack Veasey at 10:55 AM