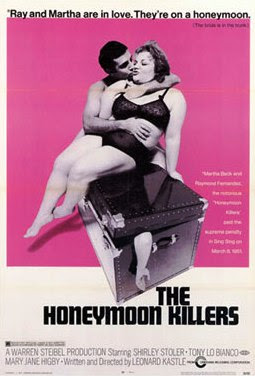 (Divine has nothing on leading lady Shirley Stoller, who also played the female Nazi -- the "Bitch Of Buchenwald" -- who humiliates Giancarlo Giannini in Seven Beauties).


This 1969 flick, the only known film by director Leonard Kastle, made an unforgettable impression on me when I first saw it, and it still impresses me every time I watch it again. The film depicts the real-life story of Ray Hernandez and Martha Beck, a notorious couple who murdered at least 12 women. Though it takes considerable liberties with the facts, The Honeymoon Killers is utterly believable – it has a gritty fly-on-the-wall perspective that makes it seem almost like cinema verite. Tony LoBianco and Shirley Stoller are also perfect for their roles. The Honeymoon Killers was originally supposed to have been directed by Martin Scorsese, who got canned due to “creative differences” with the producer. Brilliant as he is, he couldn’t have done a better job than Kastle.

Alternately funny, sexy and horrifying, the film follows Ray and Martha as they con a series of gullible women into marrying Ray so they can abscond with their money. Overweight Martha poses as suave, hunky Ray’s sister so she can accompany him, but her jealousy compels her to kill the women he marries, transforming his modus operandi from mere con jobs to mass murder. Martha and Ray’s real passion for each other makes us identify with them rather than the whiny women they victimize, but their ruthlessness and cruelty still shocks when the murders are shown – especially in the one case where they kill not only the latest wife but her young daughter.

I won’t spoil the ending for you, but I will say that the film makes us empathize with the killers even at the end – putting it in that rare category, along with In Cold Blood and a few other titles, of films that truly succeed in portraying multiple murderers as human. Though it doesn’t shrink from showing violence, it’s more of a crime drama than a horror movie -- but it’s riveting from start to finish. And The Criterion Collection DVD does a superb job with its presentation.

And yes, Tony LoBianco looks as good here as he did in God Told Me To, and we do see him shirtless.
Posted by Jack Veasey at 9:59 AM