SAM'S LAKE: can a slasher flick be PC? 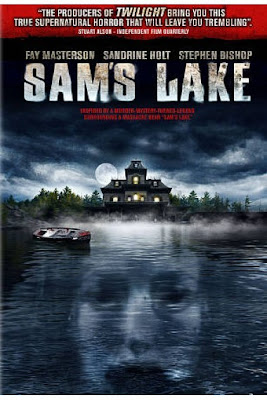 Sam's Lake (2005) seems like a typical slasher film -- a group of five young adults visit a cottage on a lake near another house where a legendary mass murder took place, despite warnings from local hicks that the area “ain't safe." Dolls made from corn husks are hanging from trees, and on any neighboring houses; a symbol like a simplified dream catcher has been made from carefully arranged stones in a nearby clearing. So far we've borrowed imagery from "Friday The 13th" and its myriad knockoffs, and "The Blair Witch Project."

After the obligatory campfire story of the local massacre, our crew pays a nighttime visit to the house where it took place. While there, they hear spooky noises and find a journal kept by the "slow" boy who committed the murders. They go back to the cottage and read from it aloud -- bad idea. A major plot twist comes to light -- in the most dramatic scene in the film -- and most of the characters spend the film's last act running for their lives from, well, let's not spoil it for those who haven't seen it. The action does really take off from this point, and the rest of the film is much more exciting than what preceded it.

I saw the plot twist coming; you may not, and even if you do, its revelation is handled very effectively. The twist itself is plausible, but the problem is, it makes a few scenes that happened before it seem implausible in retrospect (though you won't have time to think about that during the action-packed remainder of the film).

"Sam's Lake" gets a couple of things right; the characters are likable rather than annoying, and they all have our sympathy because they've all had to struggle with difficult life situations. They aren't -- as is too often the case -- annoying young snots we want to see killed, so we do feel afraid for them. And it helps that the cast is good. The movie also doesn't overdo the gore aspect (though the first killing of a principal character is pretty bloody and shocking.)

Speaking of the first principal character to get killed – spoiler ahead -- he’s the gay one. He’s Dominik (Salvatore Antonio), the only mildly queeny best friend of title character Sam (Fay Masterson). His murder is the most brutal thing in the film. His depiction isn’t homophobic otherwise, though he occasionally gets subtle attitude from Melanie (Megan Fahlenbock). He does bring out the homophobia in movie critics, though, who love to refer to him as “the obligatory gay sidekick.” 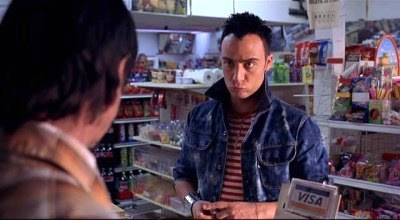 Several critics expressed annoyance at the film’s so-called “politically correct”/“Movie Of The Week” characters: a black man (Stephen Bishop) with a recovering addict Caucasian girlfriend (Fahlenbock), a woman fresh out of an abusive relationship (Sandrine Holt), and the gay male Dominik. I found it refreshing to have characters who had more of a back story than Hot Eye Rolling Blonde Bimbo and Hot Jock.

However, speaking of hot – Sam’s local friend Jesse (William Gregory Lee), a handsome and svelte young blond, runs around shirtless throughout the last third of the film. And I was glad he did. What’s a slasher flick without eye candy?

Writer/director Andrew Erin's film is entertaining and well worth seeing. I wouldn't call it great, but it's got more substance than a lot of slasher films. Generally fans seem to like the big plot twist, but it bothered me. See what you think.
Posted by Jack Veasey at 10:29 AM