Celebrate May Day With My All Time Favorite Film: The Wicker Man (1973) 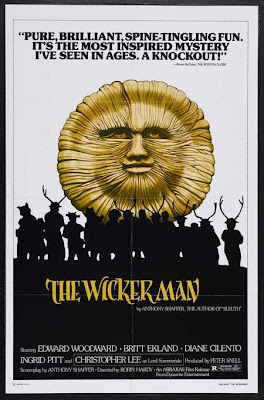 It’s May Day (or Beltane, as pagans call it). May Day is the best day of the year to watch Robin Hardy's brilliant 1973 classic film, The Wicker Man, which happens to be my favorite film (horror or otherwise) of all time. Again, I mean the original British film, not the horrible remake with Nicholas Cage.

The late Edward Woodward (of TV's "The Equalizer") stars as a stuffy mainland police sergeant who's called to investigate a young girl's disappearance on Summerisle -- a fuedal community off the coast of Scotland. He is engrossed in his search, but appalled by the pagan customs of the island, where people, among other things, dance naked outdoors to worship nature, and teach their children about reincarnation. The natives calmly enjoy watching the sergeant become more and more scandalized as they prepare for their May Day celebration. Christopher Lee presides over all this as Lord Summerisile, the ruler and owner whose island bears his name. At one point, when Woodward has all but gone blue in the face, Lee cheerfully tells him, "do sit down, Sergeant; shocks are so much better absorbed with the knees bent." Ultimately something darker is going on, though it's not exactly what the film leads you to expect.

The island is a beautiful place, and the film is full of compelling and authentic-sounding folk music written by Paul Giovanni, celebrating its various local customs and personalities. Mostly we enjoy, with the inhabitants, their laugh on the uptight sergeant, and marvel at their exotic way of life. Telling you any more would ruin it, though you probably already know the ending – which has never spoiled my watching the film yet another time. Suffice to say that the film is mostly more like a seriocomic drama than a horror movie, but that the ending is pretty darn harrowing.

One highlight is getting to see Lord Christopher ebulliently leading a procession through the streets in drag. I’m pretty sure it’s the only time the great man has ever worn a dress onscreen, though if there’s another, I’d love to know about it! Lee also recites Walt Whitman’s “I think I could turn and live with animals” poem from Song Of Myself while watching a pair of snails copulate (and hearing voluptuous blonde bombshell Britt Ekland and a young villager – a virgin beforehand -- copulating not far away).

The whole movie is 103 minutes. Beware of the shorter American “theatrical” version that cuts Britt Ekland's mesmerizing nude song and dance, among other things.
Posted by Jack Veasey at 11:00 AM