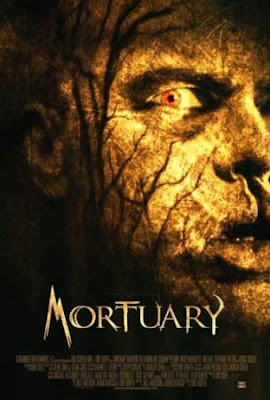 I got this 2005 Tobe Hooper flick in a 4-movies-for- $5 set at KMart. I haven't watched all of the films yet, but I bought the set because of this one, which I remember well. Denise Crosby (Pet Sematary) acquires a funeral home in a California small town soon after the death of her husband. She and her teenage son Jonathan (Dan Byrd) move into a house on the funeral home property.

Jonathan gets a job at the local diner, and makes some teenage friends -- and Goth bully enemies. His friends tell him the legend that a hideously deformed child from a family who once owned the mortuary -- who kept him locked up and abused him -- is still living there, haunting the place.

Of course this is true, and the first people who run afoul of him are the Goths, when they show up late one night to vandalize the cemetery. But there are bigger problems –including a weird fungus that looks like black veins and turns anyone living or dead that it touches into a homicidal zombie.

The cast is likable, the effects are good, the action fast-paced and involving. There's also a fair amount of humor that makes the movie more fun. My favorite scene is one where Mom makes several horrifically messy mistakes during her first autopsy while the kids are smoking pot upstairs, playing loud rock music, and the oblivious, stuttering local sherriff is pounding on the front door. The movie is enjoyable till the very end, when we're subjected to one of those "surprise" extra endings that makes no sense. It's still one of director Hooper's better efforts in recent years. 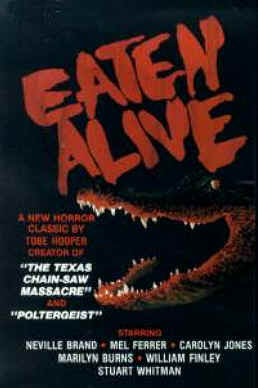 I watched this on IFC Grindhouse recently and went to bed with a headache. I saw it in the theater many moons ago, didn't remember it all that well, and was intrigued by the cast -- which included a very feeble-looking Carolyn Jones (TV’s original Morticia Addams) as a madam named "Hattie." It has a lot of good actors in it (also Mel Ferrer, Stuart Whitman, Marilyn Burns, William Finley -- a fave of mine -- and a very young Robert Englund as a horny redneck drug dealer). (Englund, BTW, was homely at that age, but his torso looks surprisingly hot in a wifebeater!)

Sadly, the actor with the most screen time was Neville Brand, playing a babbling demented-old-soldier hotel proprietor whose guests mostly ended up scythed to death and/or being fed to his pet crocodile. A lot of his dialog sounded improvised, and loud incoherent ranting gets old fast. William Finley inexplicably started barking like a dog at one point, and there was a little girl hiding under the house who kept squealing whenever she wasn't screaming. There was also extensive use of garish red lighting, which didn’t help.

I was horrified, but not in the way I hoped to be. I guess this movie was director Tobe Hooper's low point. I wanted to jump into the croc pond as a means of escape, but I stuck with it till the end. Ah, the things we do for love of the genre...

BTW, the most horrifying thing in the film was that Carolyn Jones's face appeared to have been utterly frozen by plastic surgery. She did a good job with the character's voice, but appeared incapable of any facial expressions at all.

After seeing this film, I'm posting about it as therapy. It's like trying to get a really nasty taste out of your mouth.
Posted by Jack Veasey at 9:51 AM