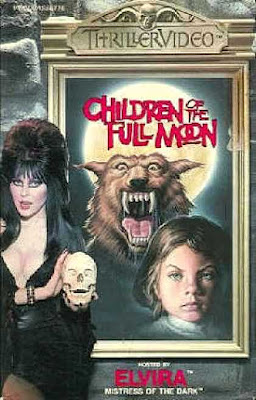 I have a soft spot for werewolves -- in my throat, which I diligently protect when they're around (just kidding -- I kid werewolves because I love them). Seriously, I love all the classic werewolf films: Universal's The Wolfman with Lon Chaney Jr., Hammer's Curse Of The Werewolf with Oliver Reed, Werewolf Of London with Henry Hull -- and the modern classics as well (The Howling, American Werewolf In London, Wolf with Jack Nicholson). But my favorites are lesser known; my top favorite was almost beaten out for that position by Dog Soldiers, a claustrophobic tale about soldiers holed up in a farmhouse besieged by the critters -- a kind of Night Of The Living Werewolf, if you will. And I've even enjoyed some of the sillier efforts like Werewolves On Wheels, a biker werewolf movie!

My absolute favorite werewolf movie, though, is an obscure British one called Children Of The Full Moon (1980). Directed by Tom Clegg, it was produced for the TV series Hammer House Of Horror and is only about an hour long.
The first time I saw it was on late night TV and I ended up not getting to sleep because it spooked me so much.

The plot follows a young married couple (Celia Gregory and Christopher Cazenove) who end up stranded for the night at the remote country home of an older woman (former bombshell Diana Dors) who presides over a strange brood of children. The kids wander around the house, and outside, at all hours of the night. Their father is mysteriously absent.

In the middle of the night, the young wife is attacked by what she claims is a monster. The couple survive and return to their lives, but their relationship remains troubled and haunted by that night. Later, when she's very pregnant, the wife feels compelled to return to the house in the woods.

That's all I can say without ruining it. It's subtle and low key, and emphasizes the story rather than special effects, which are minimal. But it's well-acted, well-written and quite eerie. It’s kind of a dark fairytale for adults.

Unfortunately, the DVD is hosted by Elvira – and while I like the idea of Elvira (ripped off though it is from Vampira, who tried unsuccessfully to sue her), having to listen to her inane jokes gets old fast. Luckily her segments are few and brief. Give me a provocatively dressed male vampire – are you busy, Spike? – and maybe I could put up with it. Meanwhile, that’s why God gave us fast forward.

What's your favorite werewolf movie?
Posted by Jack Veasey at 11:29 AM