FRIDAY THE 13th: A DAY FOR A DECISION 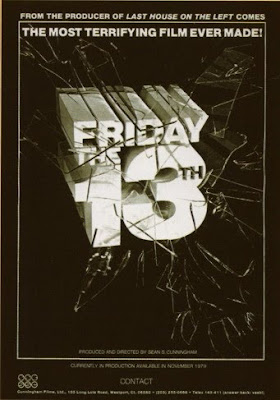 (The original Variety ad for the now-classic film)

OK, folks, I've got an announcement about Lavender Lair Of Horror.

From now on, this blog will no longer appear on Fridays. I originally planned to add a new blog every Friday, but it turns out Friday has become an impractical deadline day for me. I've become involved with running events on Thursday nights, which means I'm out and up late the night before, and I'm really dragging on Fridays -- not a good state to be in when trying to produce snappy, entertaining writing.

So from now on, I'm going to post the blog on a less predictable schedule -- I'll still do something every week, it just won't always be on the same day. I'm also going to be more flexible about WHAT I post -- I won't exclusively do a film review every time. Some items may be shorter, some longer. The blog may also appear more than once in a week. I'm going to experiment with my approach to it, and see what happens.

If you have any thoughts about this change, please feel free to comment. The old approach just isn't working any more, so I'll shake things up.

BTW, my partner got hired for a new job today -- so that proves Friday The 13th doesn't have to be unlucky. Here's hoping it's a good day to inaugurate other changes as well!
Posted by Jack Veasey at 11:46 AM