CHEMISTRY AMONG THE CANNIBALS: "Ravenous" 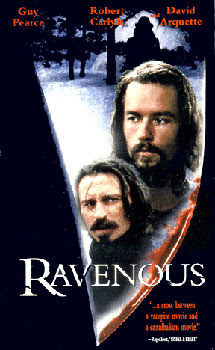 You’d think a film which includes a moment of high drama when one male character cries out, “He was LICKING ME!” is probably a gay movie, right?

You wouldn’t exactly be wrong, but director Antonia Bird's “Ravenous” purports to be a nonsexual film about cannibalism among soldiers in 1840s California. The story is loosely based on the case of Alfred Packer, a prospector and former Union soldier who was accused of eating companions with whom he was snowbound in the Colorado Rockies in 1875. It also echoes the more well known story of the Donner Party.

Guy Pearce stars as a US Army officer who freezes in combat when his unit is massacred in the Mexican-American war. He survives by playing dead, and is carted back to Mexican headquarters with the other corpses – and with his commander’s blood running into his mouth. In remorse, he suddenly rises up and captures the Mexican command, which nets him a promotion to Captain. However, he is recognized as a coward and transferred to a remote fort in the Nevada mountains.

A stranger named Colqhoun (Rober Carlyle) shows up at the fort and shares a spellbinding story of how his wagon train, relying on the guidance of one Colonel Ives, got lost in the Sierra Nevadas. They had to resort to cannibalism to survive; Ives had misled them deliberately, and provoked them to cannibalism.

The soldiers and their Commanding Officer, Colonel Hart (Jeffrey Jones), decide they should investigate Colqhoun’s story and search for survivors. They of course ignore the warnings of George (Joseph Runningfox), their Native American scout, who tells them that a man who eats human flesh becomes a powerful cannibalistic demon called a “Wendigo.”

When they reach the location of Colqhoun’s tale, his behavior rapidly gets weirder and weirder, and it soon becomes clear that he is, in fact, really Colonel Ives. He has lured them there to massacre and eat them. For me, this is the scariest part of the whole film. It quickly escalates from spooky to downright bloodcurdling, and Carlyle’s gleefully leering performance is the most chilling thing about it.

Boyd hurls himself off a cliff to escape from Ives, and breaks his leg. He hides in a pit with another wounded soldier who soon expires. Yes, he ends up eating some of his companion’s flesh out of desperation. Eventually he is strong enough to drag himself back to the fort, where no one believes his story. No one currently there has met Colqhoun – until he arrives again as the new commander, cleaned up and well dressed, calling himself Colonel Ives. No one will believe Ives is the killer, and he begins to secretly taunt Boyd, claiming eating flesh can heal all illnesses and wounds. And the fort's inhabitants begin disappearing.

The film certainly has a strong gay subtext. The relationship between the protagonist and antagonist is every bit as bitter (and intense) as a love affair gone wrong. Ives repeatedly tries to goad Boyd into eating human flesh, for which he has developed a taste, though he denies it vehemently for as long as he can. The situation echoes the classic clandestine relationship between a gay man and a married closet case-- not that I’ve ever personally engaged in such ill-advised behavior (nudge nudge wink wink). And there is a pivotal scene, which I can’t describe without spoiling the film, where the two do literally end up in each other’s arms.

It’s all played in such a way that even the supernatural aspects seem plausible – the only references to them are in convincingly delivered dialogue. The cast and locations are perfect, and the gore effects very realistic. Above all, Pearce and Carlyle have electric chemistry together – and their relationship is the heart of this haunting, disturbing film.
Posted by Jack Veasey at 12:41 PM