This Town Is Serious About Population Control 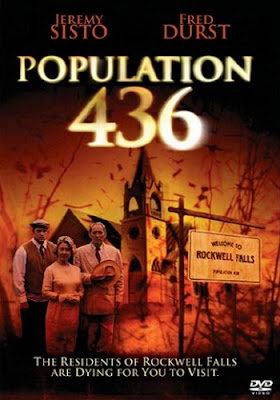 Jeremy Sisto stars in "Population 436" (2006) an old-fashioned mystery/thriller that draws at least part of its inspiration from Shiley Jackson's classic short story "The Lottery." Sisto plays Steve Kady, a census worker who professionally visits the charming village of Rockwell Falls for what he thinks will be just a few days.

The residents welcome Kady warmly as a new friend, but it strikes him as odd that the town's population has remained at exactly 436 for over a century. His suspicions are further aroused when he learns that every resident who tries to leave dies "accidentally," and that anyone who wants to leave is considered a victim of "The Fever," a mysterious illness that causes people to go at least temporarily insane.

The treatment for "The Fever" -- practiced by the apparently unlicensed town doctor, who inherited his job from his father and grandfather -- is at first shock treatment and later, in more persistent cases, lobotomy. Kady becomes determined to rescue Amanda, a young girl currently in the doctor's "care," and of course also falls for a local woman (Charlotte Sullivan).

You can probably see where this is going, but the story and dialogue are well written, and made plausible by a perfect cast. The elements borrowed from Jackson's famous 1948 New Yorker story play only a small (but important) part in the plot, and the other twists are plausible enough to arouse our concern for the likable characters. Director Michelle McClaren has crafted an involving little film with a substantial story that will hold your interest -- and that doesn't compromise in the end.

(Of course, it never occurred to the writers that having at least SOME gay people in town would help avoid unexpected population growth. Just sayin'.)
Posted by Jack Veasey at 11:30 AM