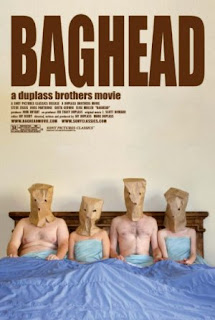 
I saw this 2008 "horror/comedy" last night, and it was an interesting change of pace from the usual commercial horror flick.

It's a low budget indie fim that looks like a documentary -- but, unlike the "Blair Witch Project," it looks like a professionally shot one. The camera is handheld but the camera operator is competent, and the movie looks the way it does on purpose. The story concerns four friends who implusively go to a cabin in the woods to write and shoot a film, having just seen a film by an acquaintance that they're convinced they could top. Unfortunately, they spend more time drinking and obsessing about their relationships with each other than they do working on the film. There are two guys and two girls -- one guy has a crush on one girl, who just wants to be friends; the other guy, the studly ringleader of the group, has a romantic history with one girl and an escalating flirtation with the other. Naturally, complications ensue, including strain on the deep “buddy” relationship between the two guys, which is a major subplot in itself.

One unexpected complication is that the concept for the film -- that a man with a bag over his head is stalking the group -- begins to manifest itself in reality. At first it looks as though group members are playing mind games with each other -- the "baghead" scares individuals one at a time, the car is mysteriously disabled, etc. -- but when all four of them face off with the intruder at the same time, things get scary (and then scarier still).

Made by brothers Jay and Mark Duplass, the film is really more like a drama than anything else -- the group's intense relationships are the real subject. I don't know who decided to call it a comedy, but the label doesn't fit, though the characters do wisecrack a bit. There is suspense, violence, and enough slasher film tropes that it does qualify as a horror film, albeit a mild one.

The cast and script are excellent. The camera movement is not a problem. The soundtrack is minimal, so the action and dialogue have to involve you, which is refreshing. Everything that happens is plausible.

It's only 80 minutes long, and while I won't say it doesn't drag at all -- the direction largely works, but isn't masterful -- the story never failed to hold my interest. If you're up for something really different, check it out.
Posted by Jack Veasey at 11:27 AM