I WAS A TEENAGE DRACULA? The "hidden" film in Herman Cohen's Trilogy 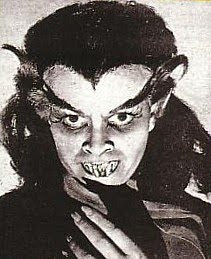 (Sandra Harrison after history's worst makeover in "Blood Of Dracula")


American International released a trilogy of teen-oriented horror films from producer Herman Cohen in 1957. All involved teens being turned into monsters by trusted authority figures secretly conducting “mad scientist” experiments. Two, including this one, were directed by Herbert L. Strock. This last film in the trilogy, for some reason, didn’t have a title beginning with the words “I Was A Teenage…”, and that may in part be why it’s much less well-known than the others, though it’s by far the campiest of the three.

Like “I Was A Teenage Werewolf,” “Blood Of Dracula” focuses on a particularly alienated teen – the hot–tempered Nancy Perkins, ably played by Sandra Harrison. Nancy is placed in boarding school because she won’t warm up to her father’s brassy new wife (married only 6 weeks after her mother’s untimely death). The degree of her anger is apparent in the opening sequence, when she grabs the steering wheel while being driven to the school and almost causes a fatal crash.

Shortly after her arrival she gets into a hair-pulling match with one of the girls who sneak into her room to “greet” her, but despite this she’s welcomed into “The Birds of Paradise,” the group of “cool” girls at the school. Unfortunately, the “Birds” aren’t the only people interested in taking her under their wing.

Teacher Miss Branding (Louise Louis) hypnotizes her – supposedly to calm her down after a second fight breaks out in the chemistry lab – using a rather large medallion “from the Carpathian mountains.” Pretty soon Branding is using the talisman long distance to turn Nancy into an animalistic killer that strangles various other girls. Branding supposedly wants to prove a theory that will put an end to war when the world discovers that she can “unleash a power in a single human being that will make the split atom look like a blessing.” The fact that the transformed Nancy has two absurd frontal fangs that make her look like a beaver in a Bride Of Frankenstein wig doesn’t help to make the attacks scary, though one – set in a supply closet – beat “Psycho” to the use of the swinging light bulb effect by three years.

But the movie has other charms going for it: the girls speak in self-conscious jive lingo that makes much of the dialogue unintentionally funny, and a boy they sneak into their room performs a sinister-sounding rock ‘n’ roll song (accompanied by a 45 RPM they play ) called “Puppy Love” -- complete with a suspiciously well-choreographed “impromptu” dance involving couch cushions.

Harrison also invests her character with enough “Rebel Without A Cause” angst to make you care what happens to her, and there’s a certain intriguing unacknowledged sexual chemistry between her and Louise Louis’s Miss Branding, who’s awfully preoccupied with proving herself as competent as any man. It remains fun to watch till the inevitable showdown, proving again that those who dabble in things better left alone “only work out their own destruction.”
Posted by Jack Veasey at 11:58 AM