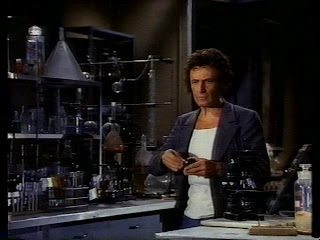 (Marceau as Shanks in the renimation lab)


Director William Castle’s last film, “Shanks” (1974) is practically unknown today, and with good reason. For one thing, it stars Marcel Marceau (as the Oz character in TV’s Buffy The Vampire Slayer once solemnly said, “nobody deserves mime, Buffy.”) For another, it aims for a childlike mentality and calls itself “a Grim Fairy Tale” – and like a fairytale, it doesn’t concern itself with even trying to be plausible. It’s very odd, not at all like any other film this writer has ever seen, and it was probably a hard movie to promote.

Marceau plays two characters – a deaf mute puppeteer, Malcolm Shanks, and an aging eccentric scientist, Mr. Walker, who employs him as his assistant in secret experiments. Shanks enjoys entertaining the children in his small town, but is exploited by his shrewish sister and drunken brother-in-law (fellow mimes Tsilla Chelton and Philippe Clay), who spend all his money and bully him.

Walker’s experiments involve reanimating dead animals with electricity and then directing their movements with a small push-button remote control box. When he dies suddenly, Shanks reanimates him. Soon Shanks kills off the mean couple who are sponging off him and reanimates them too. Then he uses them as birthday party entertainment for Celia, a teenage girl on whom he seems to have a crush, sort of a Marcia Brady type (Cindy Eilbacher). She’s supposed to be a sweet innocent, but has no problem with laughing as the corpses stagger around to amuse her, sometimes making little faux pas like -- whoops! – cutting off their own fingers with a slice of cake.

This is all very amusing till a group of bikers show up and invade Walker’s mansion, dragging the corpse of a comrade killed in a crash. They tie up Shanks and terrorize Marcia – er, Celia. A zombies-vs.-bikers battle is inevitable, of course, followed by an ending that makes absolutely no sense.

Since the main character and reanimated dead don’t speak, long sequences have no dialogue. These are sometimes prefaced by title cards that strain to remind us of silent movies, as does the hokey, heavy-handed “old-fashioned” music that comments heavy- handedly on the action, especially when the film is trying to be funny. What works during the wordless sequences is that the mimes give the zombies grotesque movements, like dead bodies awkwardly jerked around by remote control would indeed have – pretty much the only believable element in the film. The scene where Shanks first reanimates Walker and makes him stand up, agonizingly wrenching himself from one impossible position to another with his limbs loudly crunching from rigor mortis, is amazing to watch.

Sadly, the absurd plot is just too dumb to accept, and the SPEAKING parts are mostly way hammy (mimes have to overdo it to get their message across without words, and it seems to bleed over into their acting). The lack of logic and believability would be okay in a movie for kids, but this is trying to be a violent horror flick – and if you can’t take it seriously, it’s not scary. And the ambiguous relationship between Shanks and Celia, frankly, isn’t cute and charming – it’s the creepiest thing in the film.

Castle himself, by the way, appears briefly as a grocer. He should have stuck to wiring theater seats and hanging skeletons from the ceiling, because his famous gimmick films all worked way better than this bizarre but unsatisfying swan song -- though if you’re a fan, it’s a must-see curiosity.
Posted by Jack Veasey at 1:25 PM