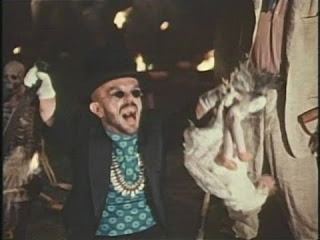 (Chickens need a stronger union on Korbai in The Snake People)

Karloff plays a plantation owner on a South Seas island called Korbai, which is governed by France. His niece Anabella (one-name actress Julissa), a Prohibitionist, comes to stay with him. She quickly falls for hedonist army officer Wilhelm (hairy chested Charles East), who works for Captain Pierre Labiche (Ralph Bertram), a pompous ass determined to repress native voodoo practices by identifying and capturing the local religion’s “ringleader,” Damballah. (Damballah is actually the name of a snake god in Voudun, but it seems like script writer Jack Hill doesn’t know that). Girls are being killed in order to be brought back as zombie sex slaves, but then they get crazed and run around the streets in mobs killing and eating luckless pedestrians (especially soldiers).

The film spends lot of time gawking at lurid ceremonies presided over by a half-naked priestess (exotic Yolanda Montes), who rubs big live snakes on her breasts and even sucks on their heads. Snaggle-toothed dwarf Santanon sacrifices chickens and laughs maniacally for no apparent reason.

The story makes little sense and the dubbing is awful, but the camera movement and music are involving, and the action is more than weird enough to hold one’s interest. It’s interesting that there are some substantially long sequences without dialogue, where the story is told purely visually. There’s a good bit of nudity and some gore (mild by today’s standards). Karloff, sadly, doesn’t have much screen time and is mostly in the film for his name and for the sake of one implausible plot twist. But I got caught up in it, and found some of its imagery haunting.
Posted by Jack Veasey at 9:06 PM