THE GAY BED AND BREAKFAST OF TERROR 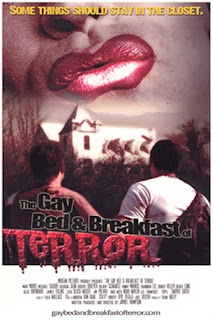 The Gay Bed And Breakfast Of Terror, which had a limited 2007 theatrical release, is a spoof of “setting” slasher movies like Sleepaway Camp. This time the setting is a “gay friendly” bed and breakfast run by lunatic Helen (Mari Marks) and her spastic nerd daughter Louella (Georgia Jean). For the first forty minutes we meet their victims, five gay and lesbian couples going to attend a big commercial party who couldn’t find accommodations any closer or better. They don’t know Helen is a fanatical fundamentalist who intends to convert or kill them – and to imprison one of their men as a husband for Louella. Or that Helen has another offspring she keeps hidden – cannibal mutant Manfred (Noah Taylor), the “love child” resulting from her once being gang-banged by delegates at the Republican Convention.

Once the killings start, the film becomes a lot funnier (and quite gory). The dialogue is full of catty one-liners, and the plot is full of outrageous twists and revelations that have you thinking, “don’t tell me they’re going to go there” (and then, of course, they do). The gore effects aren’t bad, but Manfred’s “monster suit” is intentionally laughable; he’s supposed to be half man, half maggot, but he looks like he’s just swaddled from the waist down in shiny trash bags.

Sadly, intentionally bad doesn’t have the amusingly naïve charm of sincerely bad. If the flick worked better, I’d say, “Imagine John Waters making a horror film.” But John Waters has the instincts and energy these folks lack, though they do seem to take the same perverse glee in their work.

One big problem is that the film has no sense of pace at all; it ambles, lurches and drags. The acting ranges from wooden to competent with an occasional inspired moment. Director/writer Jaymes Thompson really needs to go to film school (or to go to a better film school).

The violence is gross, but not scary, because we don’t like any of the characters – we share their cynical, sarcastic view of each other, just as we would if they were snotty teenagers in a summer camp massacre flick, and we want to see them “get it.” There’s some gratuitous nudity and very mild softcore “sex” scenes (again, at about the same level of those in slasher flicks). The movie has its moments, but the script’s ideas are often a lot more entertaining than their (pardon the expression) execution.
Posted by Jack Veasey at 11:01 PM