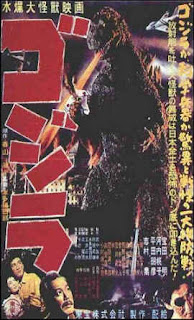 Everyone has seen the first “Godzilla” film with Raymond Burr, but many people don’t realize it wasn’t really the first. Twenty minutes were eliminated from the original film to accommodate inserts with Burr that added nothing to the story but got a big American name into the credits. It had a little more pathos than your average big-city-gets-stomped-by-bigger-monster flick that came out in the 1950s, but a lot of fans would have been hard pressed to explain exactly why.

The original film, in Japanese but with English subtitles, is a totally different experience.

Considerably scarier but also somber and sad, the original “Gojira” makes the movie’s connection to the bombing of Hiroshima a lot clearer, lingering a lot more on the disaster the monster inflicts on Japan and the suffering of the devastated survivors. It also spends a lot more time on the Japanese characters whose story this really is, and makes it clear what wonderful actors are playing them (no awkward dubbing here). In fact, veteran actor Takashi Simura, who plays Paleontologist Dr. Yamane, had just recently appeared in another famous Japanese film – Kurosawa’s “Seven Samurai.”

Much more time is spent in this version on what is just a subplot in the Burr adaptation – the romantic triangle between Yamane’s daughter Emiko (Momoko Kochi), hero/scientist Dr. Serizawa (Akihiko Hirata) and salvage worker Hideto Ogata (Akira Takarada). Emiko is obligated by an arranged marriage to the scientist, who she respects and admires but does not love – she really loves Hideto. Serizawa has invented a device that can stop Godzilla from ravaging Japan, but resists using it because he fears it will be later appropriated as a military weapon (a nod to the film’s persistent anti-war message). Ultimately, he gives in – but lets the device destroy him, too, so its secret will die with him, freeing Emiko to follow her heart. It’s much clearer in this version how much his sacrifice reflects principles of honor in Japanese culture.

The monster here is also nothing like the amusingly silly rubber-suited wrestler of so many sequels aimed at a child audience. Filmed mostly at night, he is an ambulatory but shadowy tower of destruction relentlessly advancing on the fleeing population – death incarnate. The fact that his searing breath looks like steam here makes it creepier, more intimate somehow. Eiji Tsuburaya's special effects were very realistic for their time, and the night shooting added greatly to the film's atmosphere of menace.

“Gojira” will in no way detract from your continued enjoyment of the more familiar version, but seeing it for the first time is a revelation. There’s more to the myth of Godzilla than a lot of us who grew up with him ever knew. "Godzilla" with Raymond Burr is an exciting 50s monster flick; "Gojira" without him is an affecting, haunting work of art whose monster is a metaphor for issues that still rear larger than his 40-story frame.
Posted by Jack Veasey at 11:32 PM