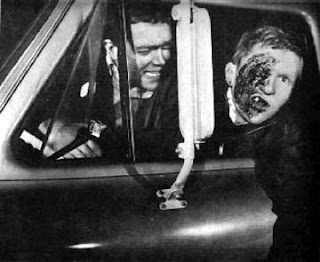 (So, Bob, you told Lori that the waittress meant nothing to you... How'd that work out for you? Bob?)


This movie actually scared the hell out of me when I saw it in the neighborhood theater at a Saturday afternoon chiller matinee in the sixties. Of course, I was a little kid then. Now it seems pretty campy.

The plot? Well, these reptilian/humanoid monsters from the sea -- created by an underwater radioactive waste leak, of course -- rip into various bikini clad girls with their claws. There's a rock band, the Del Aires, that plays in a beach pavilion (one song is called "The Zombie Stomp"); a gang of menacing bikers: shirtless guys fighting in the sand: a hacked-off monster arm, still alive but surprisingly flammable; and a stereotypical maid named Eulabelle who does an even funnier Butterfly McQueen than Vicki Lawrence did, only not on purpose. The "scales" on the monsters pretty much make it look like the costumes are hanging in shreds. It doesn't sound like it makes any sense, you say. Who cares? The whole movie is pretty much just one unintentional guffaw after another.

You get an idea of how plausible the whole thing is when they reveal the one way the monsters can be killed: sodium makes them burst into flames. Hmmmm. These monsters came out of the sea, which is made of salt water, but that didn't hurt them -- well, without the sea, you can't have the beach party aspect: logic be damned!

In some ways it is pretty daring for its era. Though it did so in black and white, it was one of the earliest horror movies to graphically depict gore, and in one scene showed a guy's corpse with his face half torn off. Its pacing is pretty effective, it has some eerie night photography, and some trippy electronic music. But then you see those "monsters" and you've just gotta laugh. Some claim "Horror..." was tongue in cheek, intended as a "spoof" on monster movies, but I prefer to believe in the film's seemingly innocent funky charm.

Like "The Mole People," it was also made into a comic book using stills from the film with word balloons added. I sure wish my mom hadn't thrown those out! When the DVD version was first released awhile back, a reproduction of the comic came free with the disc while supplies lasted.

The DVD also includes "Curse Of The Living Corpse," another film directed by Del Tenney, which was released alongside "Horror" as a double feature in theaters.

"Corpse" was written by Tenney (he didn't write "Horror"), and is something of a whodunit. What's left of a wealthy family gathers when their patriarch dies, and a masked figure begins killing them off one by one. Their father wasn't crazy about his children, and the methods of murder all correspond to the curse he threatened them with if his will was not precisely followed. Is the killer a member of the household, or the old man come back from the dead? One of the suspects is a young Roy Scheider, who chews scenery amusingly as a relentlessly sarcastic drunk. "Carnival Of Souls" star Candace Hilligoss is in it too, though she was five months pregnant at the time.

Tenney writes a fairly credible story, and the masked killer scenes are pretty scary. "Corpse" is in every way a far better film than "Horror" -- but it's not anywhere near as much fun.

By the way, "Horror Of Party Beach" was featured on an episode of "Mystery Science Theater 3,000" that is consistently cited as a fan favorite. I remember Tom Servo quipping when he first sees one of the monsters: "So, radiation has a sense of humor?" If you have one too, you'll probably love "The Horror Of Party Beach."

Running times: "Horror Of Party Beach," 78 minutes; "Curse Of The Living Corpse," 84 minutes. Both films were originally released in 1964. The DVD is available from Dark Sky Films.
Posted by Jack Veasey at 10:58 AM