THIS SILLY MOVIE SHOULD GIVE YOU A BUZZ 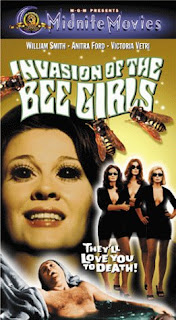 This film was released in 1973, the year I graduated high school, but I didn't learn of its existence till Roger Ebert mentioned it on a "Guilty Pleasures" edition of Siskel and Ebert many years later. I made a point of tracking it down then, and found it to be every bit the hoot he'd said it was.

Neil Agar (William Smith) of State Department Security is sent to a small town called Peckham to investigate the death of Dr. Grabowski, a prominent scientist conducting government-sponsored research at Brandt University. Grabowski died of a coronary during sexual intercourse at a local motel. The problem is, he's not the only one. 8 local men die the same way within 3 days, 2 of them other scientists at Brandt. Among the others are a 21 year old boy, a cop, and a cannery worker, all apparently healthy with no history of heart trouble.

The jokes that start going around are exactly the kind you'd think. One of Grabowski's colleagues says, "I'd sure like to meet the girl he was with -- just think about it, boys: coming and going at the same time!" At a town meeting held to discuss the "epidemic," Dr. Murger from Brandt (Wright King) suggests it may be a virulent new venereal disease, with sexual abstinence as a possible solution. The crowd scorns him and he is murdered shortly thereafter. But later we see the following exchange between a local couple in their bedroom: the man looks at his wife and says, "abstinence isn't going to be anything new around here," and she retorts, "If I thought it would kill you, I'd do it."

The killers are a cult of "Bee Girls," local women who have mutated into creatures with black compound eyes who are compelled to mate frantically over and over, though the mutation has made them sterile. Except for their weird eyes, which they hide behind shades, these are voluptuous babes who have no problem seducing the leering, panting local men, who keep thinking with their nether regions even though their peers are dropping like flies. Their bitter, frustrated wives are also easy to recruit for the growing Bee Girl brigade; the transformation involves being exposed to radiation, covered with white goo and then live bees, and then peeled-- and welcomed in a soft-core lesbian orgy.

The prime suspect as the Bee Girl leader is Doctor Susan Harris (Anitra Ford), an entomology professor at Brandt. It's up to Agar and college librarian Julie Zorn (Victoria Vetri) to figure out exactly what's happening and how to stop it. (BTW, another suspect is a gay man, and it's handled inoffensivley -- and not made into one of the film's many jokes.)

The movie is about as funny as the jokes quoted above, with lots of nudge-nudge-wink-wink dialogue and some very silly special effects (the scenes from the mating bee girl's compound-eyes viewpoint are amusingly ludicrous). The 70s outfits and hairdos will provoke some chuckles too. There are lots of exposed female breasts and butts, some full frontal female nudity, and a number of very brief soft-core sex scenes. (It was rated R). But it all has a giggly "isn't-this-naughty" innocence about it that defuses the eroticism. You'll have some laughs, but in the literal sense.

It's light, cheesy 70s science fiction -- not at all plausible, but fun. Directed by Denis Sanders, it runs 85 minutes. It is available as a DVD (amusingly, one recently released disc bears the totally inaccurate title "Graveyard Tramps.")
Posted by Jack Veasey at 10:18 AM