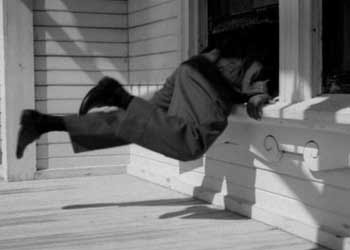 (A luckless messenger gets caught in the web of Spider Baby).


Jack Hill’s rarely-seen 1964 cult film Spider Baby is one of the weirdest films I’ve ever seen, despite all the impressively weird films released in the several decades since its creation and long-delayed release. The film takes its name from the shocking opening scene in which a girl’s game of “spider” costs a messenger an ear, among other things. But the violence (actually pretty tame by today’s standards) takes a back seat to the strange dynamics of a twisted little family living in an isolated house.

Its central character is Bruno, a chauffer – played with affecting pathos by Lon Chaney Jr. – who cares for three demented young adults after the death of their father. The Merrye family suffers from a strange disease that causes mental and emotional growth to cease at age 10, and then to regress through childhood and on to an animalistic, violent state. “The children” are already having occasional outbursts of violence, and there are a couple of older relatives in the last monstrous stages secretly locked away in the basement. Bruno covers up what damage the children do, including the murder, and keeps them in seclusion in the dilapidated family home – until greedy relatives and a lawyer (complete with secretary) show up wanting to claim the estate and put “the children” away. The relatives’ big mistake: they insist on staying the night.

One of the creepiest (and funniest) scenes is dinner. The guests are appalled by the family’s “vegetarian” diet – which looks like clumps of weeds – and Bruno confides that, because of their illness, it’s dangerous for “the children” to be allowed to develop a taste for meat. Then he explains why the bald “boy,” Ralph, is allowed to partake of the one edible course – rabbit: “he’s allowed to eat what he catches.”

The cast is uniformly wonderful. Sid Haig, at the beginning of his long career as a horror actor, plays Ralph with an unnerving mixture of wide-eyed innocence and sudden bursts of savagery. The two girls, Elizabeth (Beverly Washburn) and Virginia (Jill Banner) are all breathy naivete and debutante manners one minute, then cold-blooded killers the next. It’s a testament to how good they all are that you identify with them despite their weirdness and violent outbursts. Your sympathies remain with them rather than the haughty Aunt Emily (Carroll Ohmart), a supreme bitch who is openly rude to them, and her oblivious crew (Quinn Redeker, Karl Schanzer, and Mary Mitchell) even after things get…well, nasty.

The center of the film is Chaney, who gives one of the best performances of his career. His loyalty to his charges and their late father is quite touching, and he even becomes tearful in one particularly moving scene when he realizes what he has to do.

The black and white photography by Al Taylor is eerie and quite beautiful, particularly in one sequence in the cobweb-shrouded cellar.

On the whole, though, it’s a fascinating 81 minutes – creepy, lurid, darkly funny, and at times surprisingly touching.
Posted by Jack Veasey at 10:25 AM