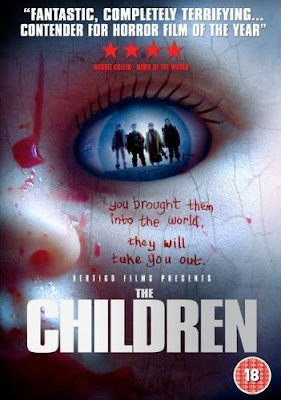 My partner and I have this little private custom. If we’re eating in a restaurant and nearby children begin screaming, making messes and misbehaving, one of us says to the other, “Have I thanked you lately for not wanting to have children?” I could see getting married if that becomes possible, but I guarantee you children will never be part of the equation for us.

That attitude was reinforced when I recently saw this 2008 British film. It's a very strange and violent little flick about two yuppie couples with way too many children between them -- most of them quite young -- who gather to spend the Christmas holidays together at a large house.

The first sign that this is a bad idea is that the youngest kid comes down with a flulike virus which quickly spreads to all of the other kids. Symptoms: first the child begins puking all over the place, then he or she becomes sadistic -- which quickly escalates into homicidal. The adults and the one teenager are apparently unaffected by the illness, but they have more than enough trouble to occupy them as they struggle to cope -- and ultimately survive.

Not having been able to master birth control despite their obvious socioeconomic advantages, the adults of course find handling violence and murder too tall an order. Teenager Casey (Hannah Tointon) is the first and for awhile the only person who realizes what's happening, but the adults -- as they so often do in horror films -- mistrust and even suspect her. With the grown ups too busy trying to deny what their tykes are doing, blame it on the other couple's kids, etc., the violence just continues to escalate unopposed, and the police, though called after the first "accident," never manage to show up.

The cast is good, and director Tom Shankland presents the whole story in a disarmingly matter-of-fact matter. The violence is gory and shocking. It's a scary movie with the look and feel of a highly realistic indie drama.

I'd recommend it, though I don't know that "enjoyed" accurately captures how I felt about it. It's a powerful film.
Posted by Jack Veasey at 9:59 AM