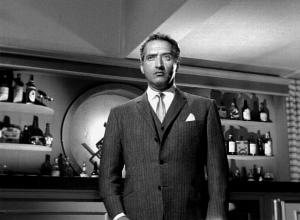 Does anyone remember the low-budget Mexican horror films from the 50s and 60s? Robot Versus The Aztec Mummy, The Braniac, The Bloody Vampire... and several films pitting professional wrestlers like the silver-masked Santo against vampires and other monsters. They were dubbed and released as kiddie matinee movies in Amercia by a guy named K. Gordon Murray out of Coral Gables, Florida. They're very campy now, but as a kid I actually got caught up in them and found some of them pretty scary. The one that got to me the most was The Brainiac, which I actually found recently as a DVD for $5.99.


Actually, director Chano Rueta's The Brainiac (1963) even now remains one of the weridest horror films ever. I originally saw it in the theater at about age eight.

The Braniac stars the suave Abel Salazar as Baron Vitelius d'Estera, a nobleman who is burned alive for witchcraft by the Inquisition in the first scene. He ridicules and curses his executioners, smirking as the flames consume him.

Three hundred years later the Baron returns to avenge himself on the descendants of his killers. His soul is brought back to earth by a comet (the most ludicrous effect in film history) and the astronomers who spot it are among his intended victims. The handsome Baron can put people in a trance using a light from his eyes that for some odd reason blinks on and off. This keeps them still while he transforms into a big-headed furry monster, creeps behind them, and sucks out their brains with a forked rubber tongue. He doesn't have to go hungry while in human form, either; he snacks on brains from a silver cup even while entertaining unsuspecting guests at cocktail parties. 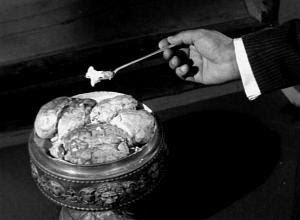 Mexican brain foood in The Brainiac


Though unintended laughs abound, for deliberate comic relief we have a couple of chuckle-headed detectives who earnestly deliver lines like, "A maniac with a lot of knowledge is a threat." The special effects are among the chintziest you’ll ever see, but the music is eerie and Salazar’s face and body language exude a cool charismatic menace that shines through the terrible dubbing.

The film is 77 minutes of pure delirium. Former acidheads should take note that it may cause flashbacks.

The other Mexican fright flick that still sticks with me is The Bloody Vampire, released the same year. I may even have seen them as a double feature. I found the torture of a servant in this film so disturbing that it even haunted my dreams (partly because it was performed by a really buff, sweaty shirtless guy). 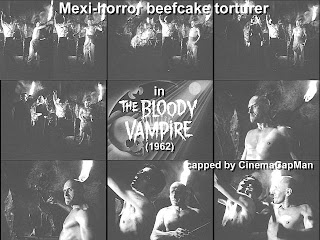 The big beefcake torture scene in The Bloody Vampire

Seeing it again now, despite its glaring flaws – more bad dubbing, an inane and way too talky English “script,” the ludicrous effect of a big rubber bat on a string bouncing in front of the camera – I still found many parts of it chilling. It has atmosphere galore, spooky sets, nerve-wracking music and sound effects, and an actor in the title role whose imposing physical presence and menacing charisma are not lost in the inept translation.

Charles Agosti plays Count Frankenhausen, a vampire who terrorizes his servants, holds his ailing but feisty wife prisoner in their palatial house, and causes a series of young girls from the nearby village to go missing. Like Salazar, he’s handsome – he resembles a younger Burt Reynolds, in fact – but he’s cruel, and sports a mouthful of very big sharp fangs when his bloodlust is aroused. He has a way with a whip, and hypnotic eyes that light up while an eerie electronic “hypno theme” plays in the background. The film contains memorable shots of him running down a corridor towards the camera, fangs exposed and cloak billowing behind him, that would be copied about a decade later in the more well-known Count Yorga movies. At one point he also goes off into a completely irrelevant five-minute monologue extolling the virtues of coffee, but he delivers in the frequent scary parts.

His wife Eugenia (Erna Martha Bauman) holds him at bay with a spear when he enters her room, and relies heavily for support on loyal servants Anna (Begona Palcios) and Lazaro (Enrique Lucero). The Count has his own enforcers and procurers, however; chief among them the icy and somewhat butch Frau Hildegarde (played to the hilt by the haughty Bertha Moss). But the Count doesn’t know that servant girl Anna, on whom he has romantic and sanguinary designs, is a spy in his household. She’s the daughter of this story’s Van Helsing, vampire researcher Dr. Valsama Cagliostro (Antonio Raxel). Unfortunately, a lot of the film’s dialogue among the good guys is pseudoscientific tech babble about a miraculous curative plant extract called "Vampirina," which sounds more like it should be dog food for "Zoltan, Hound Of Dracula." The dubbing is as dumb as the translation.

The most effective scene in the movie is the first, a sequence showing an uncannily soundless horse-drawn carriage driven by a Grim Reaper-like figure in slow motion over a foggy country road where a lynching has just taken place. Nothing that follows quite matches the atmosphere of that sequence, but the tension in the Frankenhausen home is palpable, and the violence shockingly gory for its time – close-ups of nasty neck wounds are accompanied by startling electronic sound effects, unprecedented in movies at the time. The torture of servant Lazaro, gleefully overseen by the Frau, is also surprisingly gruesome.

If you can forgive its flaws, this Miguel Morayta flick can really make your flesh crawl. It’s melodramatic and pretty silly on some levels, but it can scare you if you let it.
Posted by Jack Veasey at 7:26 PM