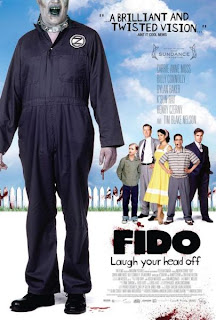 Director Andrew Currie's "Fido" (2006) can only be described as "A Boy And His Zombie" movie -- a "Lassie" episode on acid, only instead of a collie, we have a zombie. Billy Connolly brilliantly plays the title role without a word, mostly just using facial expressions and the occasional grunt to convey a great deal about his surprisingly sympathetic character.

The film is set in a fictitious world in which the zombie/human war that began in "Night Of The Living Dead" was won by the humans, and many zombies have been enslaved through the use of an electronic collar that turns off their hunger for human flesh. The time period has been shifted from the late sixties to the late fifties or very early sixties, a better era for playing out the film's ideas, and the look of the period is a big part of the running gag.

People live in towns safely fenced off from the "wild zones" where undomesticated zombies roam free; these areas are where you might end up if you can't afford a funeral (in which the head is buried in a separate casket). Unfortunately, the corporation that makes the collars, ZomCom, has used the situation to take over society, though most of the population is afraid to even talk about it.

Though there is violence and gore in "Fido," most of it is played for laughs, and you can't really call the film a "horror" movie. It's a black comedy/social satire that lampoons the conformity of suburban middle class life. "Fido" lives with a family that purchases him in order to fit in -- formerly the only family on the block without even one zombie. Timmy, the son (K'Sun Ray) and Helen, the wife (Carrie Anne Moss) bond with Fido, but complications arise when his collar malfunctions and they have to conceal the consequences. And yes, the name Timmy is a reference to "Lassie," and the scene in which the film openly refers to that is one of the funniest moments in "Fido."